Top Universities in New York for Graduate and Undergraduate Programs 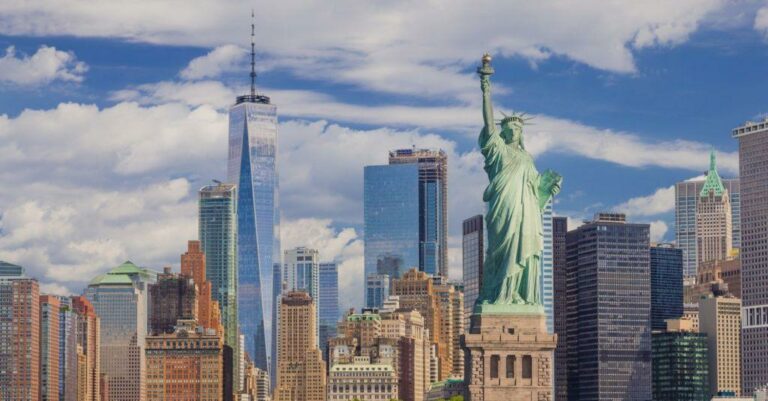 Every year, thousands of international students apply to the top universities in New York for graduate/undergraduate programs. The state of New York houses several high-ranked universities and multiple Ivy League schools, making it one of the most popular study destinations in the world. The top universities in New York offer an excellent array of undergraduate, postgraduate, PhD as well as integrated programs in various disciplines, i.e., science and technology, medicine, engineering, business, art, language and media studies, law, applied sciences, et al. Quality education coupled with a diverse selection of courses present the students an opportunity to choose the program of their choice and passion.

In conjunction with excellent quality education, New York also provides international students with a culture rich learning environment, as it is a hub of people coming from diverse cultural backgrounds and multiple ethnicities. An astounding number of top-notch business establishments and multinational enterprises are headquartered in New York, which opens up internship and job opportunities for students passing out of these top universities in New York.

In this article, we have enlisted the top universities in New York for undergraduate and graduate programs, the list of majors that they offer, QS world rankings and other relevant details. 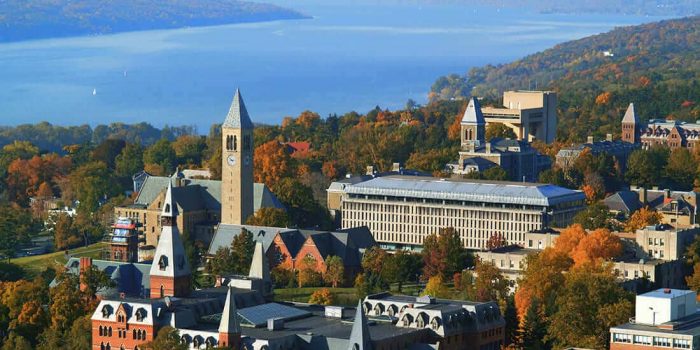 An Ivy League University, Cornell University is a prestigious private research university located in Ithaca, New York. With a mission and vision that promotes learning, discovery, engagement and dissemination of knowledge, Cornell University aims to enhance the quality of lives of students and people around the world. Founded in 1865 by Ezra Cornell and Andrew Dickson White, Cornell University constructed its first building, the Morrill Hall, on the main Ithaca campus. This campus today houses 608 buildings spread across 2000 acres.

Cornell University is a federal land-grant institution of New York State, a member of the Ivy League, Ancient Eight, and also a partner of the State University of New York. There are 16 colleges and schools under this university, with nine undergraduate units, four graduate and professional units in Ithaca, two medical graduate and professional units in New York City, and one unit in Doha, Qatar.

Cornell University alumni are notable personalities who hold influential positions in media, politics, science and business. The university has produced many prominent Nobel laureates, Olympic Medalists and other distinguished scholars.

The most popular majors offered by Cornell University are in the spheres of Engineering, Management, Business, Marketing, Medicine, Biological and Biomedical Sciences, Computer and Information Technology, Agriculture, Media Studies, etc. 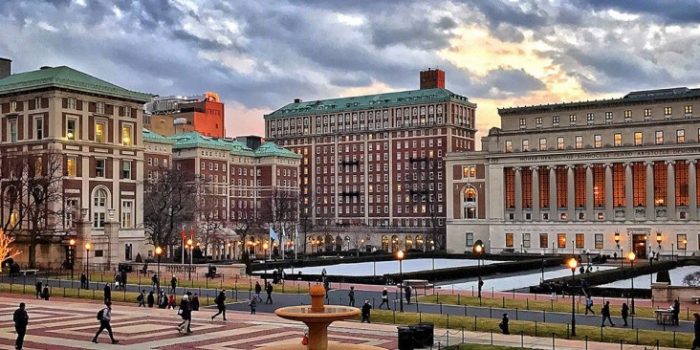 Columbia University is one of the eminent research centres in the world, offering a distinctive learning environment for students of various professional streams. The university caps in on the vast research and industrial resources available in the metropolis of New York City. The scientists and scholars of Columbia University have played a vital role in major scientific breakthroughs in the areas of brain-computer interface, nuclear magnetic resonance, the laser and maser, etc. The university has produced numerous Nobel laureates, Fields medalists, National Academy of Sciences members, Olympic medalists, and many more prominent personalities.

The university has 20 schools, of which 16 are graduate schools and four undergraduate schools. Being the founding member of the Association of American Universities, Columbia University was the first university in the USA to grant the MD degree.

Columbia University is ranked 19th in the world as per the QS World Rankings of 2021 and is consistently regarded as one of the top 20 in the world over the decades. 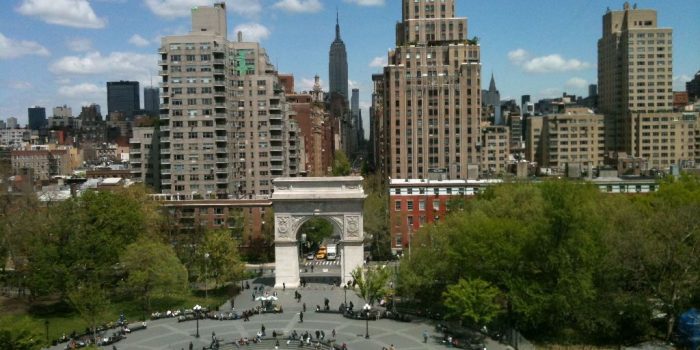 The New York University, popularly known as the NYU, is a private research university founded by a group of New Yorkers in the year 1831, under the guidance of the then Secretary of the Treasury, Albert Gallatin. NYU is a leading innovator in higher education, mainly focusing its reach on the middle class, assuming an urban identity and professional focus, with 19 schools and colleges under its wing.

NYU attracts international students from over 133 countries and provides them with focused and diverse learning drawn from the faculty and staff who come from distinct backgrounds. NYU has produced a vast network of distinguished alumni who have succeeded exceedingly in the fields of arts and sciences, technology, sports, government, and other sectors in every corner of the world.

The New York University is ranked 35th as per the QS World Rankings 2021 and is ranked 7th by the Times Higher Education World University Rankings for producing the largest number of financially successful alumni who are millionaires.

The University of Rochester 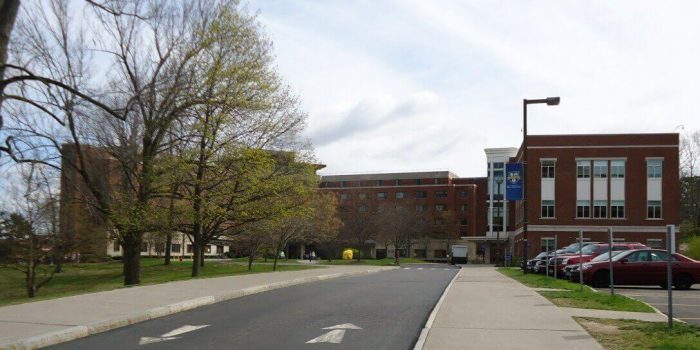 The University of Rochester, founded in the year 1850, is one of the leading private research universities in the world, with a long tradition of breaking boundaries in the fields of arts, sciences and engineering. The University of Rochester aspires to transform ideas into successful enterprises by adopting the methodology of questioning, pushing, learning and unlearning. Their value-based learning system ultimately aims at making this world a better place to live.

The University has enrolled 12,000 plus students for undergraduate and graduate programs. The U of R is located in western New York, comprising 3,000 faculty members with a 10:1 student-faculty ratio, which provides personal focus and learning for students. The University of Rochester has 158 buildings that are home to 200 academic majors, with a keen focus on research and developmental studies.

The alumni of the University of Rochester are some of the notable Nobel laureates, Pulitzer Prize winners, Grammy awardees, members of the National Academy of Sciences and Engineering, Rhodes scholarship awardees, and belong to many other accomplished fields of recognition.

The University of Rochester is ranked 154th according to the QS World Rankings 2021. The UR is ranked 34th in the national universities rankings of the USA and 140th in global universities by U.S. News & World Report. It is ranked 4th in the New York Rank 2021 as per the Times Higher Education and remains one of the top universities in New York.

The University of Rochester houses schools and divisions in the fields of Arts and Sciences, Engineering, Music, Medicine and Dentistry, Nursing, Business, Education, Laser Energetics. The University has educational programs exclusively devoted to Optics and awards half of the major Optics degrees across the United States of America. 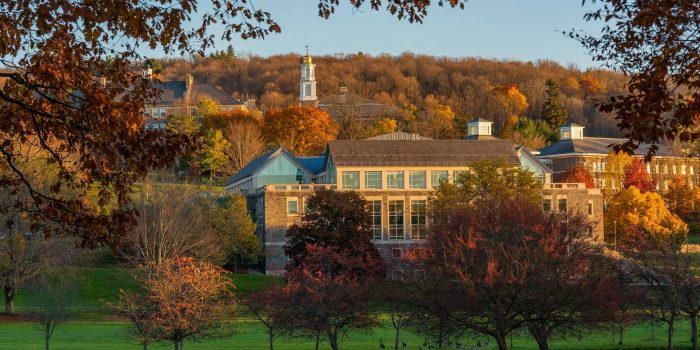 Colgate University is known to have the most spectacular campus in the United States of America. The campus has 88 buildings amidst greenery spread across a 575-acre campus. Colgate’s world-renowned faculty members empower the students by providing a personalized learning experience at a student-faculty ratio of 9:1. Colgate University alumni are known to be highly successful in their careers, with Forbes ranking Colgate the 16th in colleges for producing highest-earning graduates.

Colgate University is ranked 50th in the US College Rank and 890th in the world according to QS World Rankings 2021.

Colgate offers 56 undergraduate majors, which culminate into a Bachelor’s Degree in Arts. As many as 40 departments and programs housed within the four academic divisions offer major and minor programs of study, some of which are: Arts and History, Asian Studies, Computer Science, Economics, English, Environmental Studies, Geography, History, International Relations, Linguistics, Mathematics, etc.

New York is home to several other outstanding educational institutions, some of which are listed below. These universities are well-known across the globe for their superior-quality education, state-of-the-art research facilities and enriching learning environment.

For international students, New York is one of the most remarkable places for higher studies. The value-based education system and the conducive learning environment offered by the top universities in New York impart a life-altering learning experience for the students. This blog attempts to capture the essence of five of the top universities in New York, their history, academic significance and their success over the years. We hope you find the right college and program of your choice as you soar higher on your educational journey.

Do check out an informative blog on the best cities to study in the USA.

best cities to study in the USA 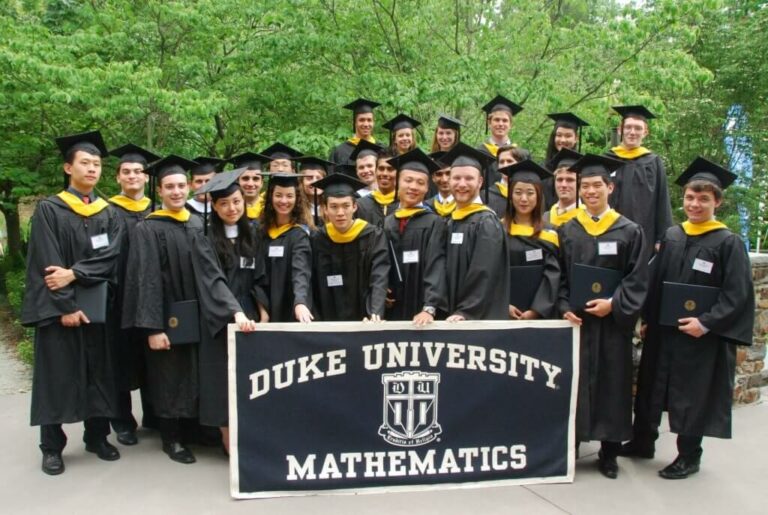 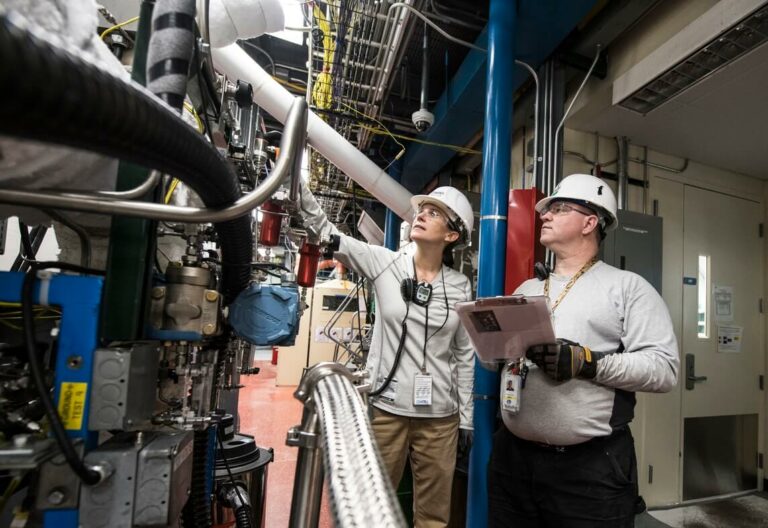 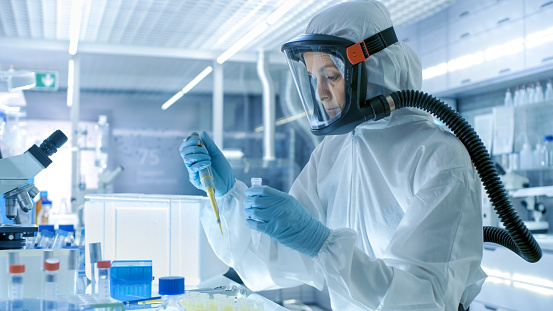